Question Lukas: What was the mood of cast when couple of people started to leave the show: Frank, Radar, Trapper,  Henry Blake. Where there some tensions that this might take show to a wrong way?

Jeff: I would give you answer to that, but I would invite you and anyone reading this material, to listen to Alan Alda appearance on podcast because he is answers that. I think it’s interesting to hear what he said. So, I wont’s spill the beans

Lukas: Ryan for you as a fan of the show what did you felt when we lost this kind of established people?

Ryan: You know it is little different for me. I did watched the show some when it was during on original airing and I do remember during final episode, I was very young and I remember when that final episode aired I went to my room and cried my eyes out. Because everybody on that show was part of my family and then everybody was leaving at that point. But lot of these episodes I didn’t watch on 1st run but on re-runs, but sometimes on re-runs they do not air episodes in correct order. So I never necessarily felt the connection to some of these characters and then knew what it felt like to have them go away because of the re-run I knew some of them will be back next day.
But I do remember some moments – when Henry Blake * spoiler alert* is killed at the end of season 3, I remember 1st time watching that and I remember it affecting me in very powerful way because he was character who I loved you know? Specially as a younger person he was very funny, very goofy he appealed to me, he was always falling down, making funny faces and doing things like that and all of sudden not only he is gone from the show, but his character is gone forever and that is impactful that is vow. That really knock you out. That’s why I’m so interested  hearing from people who are watching it for the very first time, so they are knowing what it feels like to fall in love with somebody like Henry Blake and then have the rug pulled out from under them. They know what it feels like to see Trapper go unexpectedly and you know who is this new guy BJ, I don’t know if I like him or not and they you end up do like him.

Frank, oh good he is gone there gonna get somebody funnier, they gonna get somebody completely different. Well they did completely different, but he was not necessary everybody cup of tea either.
Radar who was beloved character, you know somebody falling in love with Radar and then all of a sudden he is gone and you see the evolution then of Max Klinger.
That’s why I’m so interested in hearing from people who are experiencing that, because I haven’t experienced that I haven’t experienced that in a same way because I saw all of episodes but I saw them in completely different random order than I ever would if I’ve would watch from episode 1.

Question Lukas: Another  one, if you need to pick: Frank or Charles?

Ryan: oh…That is easy for me

Ryan continues: I’ve sad several time on podcast Charles Emerson Winchester III is one of my, not just my all-time favorite MASH characters but one of my all time favorite characters on TV. Played masterfully by David Ogden Stier. He is character that on the surface is so unlikable, but when you start peeling layers of the onion and you start seeing what is underneath and what makes him Charles and there actually is compassionate caring person under neath that façade and in a hands of a lessor actor that could have been just another Frank Burns. I don’t say that in any way to demean Larry Linville, because Larry Linville had a thankless job to make that character work and he did. He was a fantastic actor to be able to take what was given to him, but problem is there was nowhere for Frank to go, there was no way to make Frank human. Because it would not have been believable. But with Charles coming in you had the opportunity to have something on surface is very much like Frank but when you start looking underneath you discover there is level of humanity in Charles heart. And man, David Ogden Stiers nailed it, nailed it. 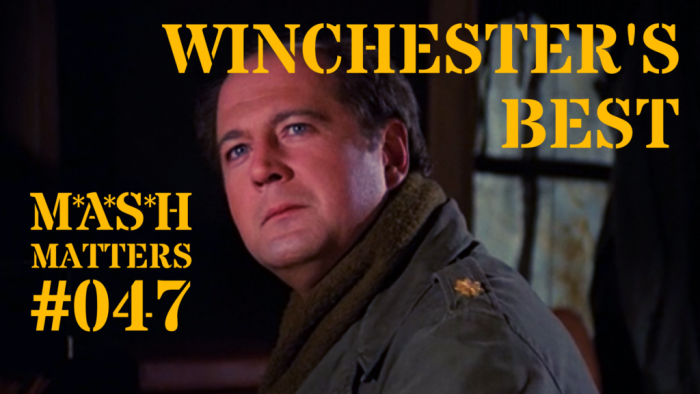 Jeff: He sure did, that was a great switch, that was a great change, they really pulled it up by doing that. I used to love watching Larry Linville do scene with Lorreta Swit and when they are in Lorreta tent. The tent is about 7 by 7, I mean it's really small these sets and it’s crowded and to watch them do this dance what they did in tiny little environment and say all the funny thing they did and have all these magnificent character trades they each did and make it all work and make sense I just sit there in amazement because it was just beautiful, it was really like watching beautifully choreographed dance. But not only with physicality but also the verbal going on. It was pretty cool, he was a great guy and l liked him very much. But I agree with Ryan boy, Winchester was a fabulous character they brought in and he did tremendous job and so did Larry. Larry did an amazing job what he did.

Jeff continues: He did stunningly good at doing it.

Ryan: Yes he did

Lukas: You had tough job to emulate all the facial expression during some of the scenes, shooting bugle out of Radar hands, that’s the scene I saw probably the most…

Jeff: laughs, but sir the angle (line from the scene) 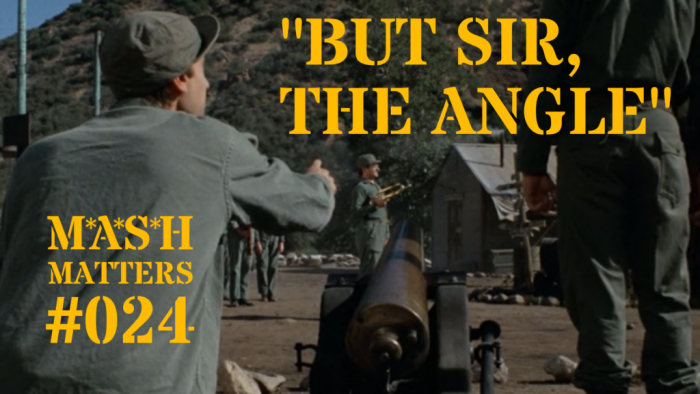 Lukas: that was wonderful

Jeff continues:  My comedy team experience payed off doing that because I spent so many years on stage making those faces that I knew face #12 was gonna big laugh in this situation, face #14 maybe not but #12 will really gonna work.

Jeff continues: You know I physically I knew what would work in terms of funny as a face and it helped in various situation where Igor is placed, those faces came in handy that I learned from running around clubs making faces.

Question Lukas: Ok, last one from pick your favorite character: Blake or Potter

Ryan: Uhhhm of the two I would steer toward more Potter, Blake was beloved character but he was not a leader. Potter was a leader and Potter was somebody who brought a gravitate, he was grounded. Blake was a doctor who was thrown into leadership, Potter was somebody who knew he had been in army, army was his career and he brought fatherly feel to character and god love McLean Stevenson, one of the funniest people on the show, but there was something about Potter and his humanity and his empathy and he could be stern but he could also be soft. He was so wise too…
When MASH was masterful in bringing in, when one character left, they didn’t necessarily  always bring in the same exact character to replace that character, just like real life it would be different person with different personality and different feel. Harry Morgan was complete 1-80 from Henry Blake in every way and both Henry Blake and Col.Potter worked in their different ways and those different scenarios. Of the two I would lean toward Potter.

Lukas: Jeff can you pick one?

Jeff: No, I can’t, you know why? Because this goes to the fact that we are, Ryan and I, are different: He watched the show I worked there and so I think of them as people and not necessarily the characters although I appreciate their acting ability and what they did but I don’t identify with one of the other, because I spent so much time with both of them as human beings,  I really admire both of them. As Ryan said McLean Stevenson Is one of the funniest people in the world, he would crack everybody up when they say cut between the shots, he would do improvisational riffs on anything that you talked to him about and have everybody on floor because he truly was hysterically funny human being. Harry Morgan was also very funny and I look at harry Morgan and think: this is Harry Morgan, this guy was in Inherit the wind and all these incredible movies, High Noon and Iove this characters and what he’s done over his whole lifetime and now he is looking at me and I’m talking to him as character and I just freaked out.

Jeff: I love them as the fact that I was standing in front of this incredible actor and I also loved the fact that I’ve could talk to one of the funniest people on the planet McLean Stevenson – so I don’t have a favorite character that way and unfortunately I can’t answer the question, I like them both so much, I had so much respect for both….so that is the difference where my head falls regarding that question.
Lukas: I kept you on the line for a long time and I would love to take this for another 2-3 hours as I still have ton of questions.

Jeff continues: Lukas thank you for asking us and inviting us, it has been lot of fun talking to you and it’s really kind of surprise that we hearing from somebody across the world, listening to MASJH, watching MASH, we appreciate it, I appreciated it and it is really fun to talk to you. I didn’t know people in Slovakia are listening to the show, you might be the only one but hey that’s is ok.